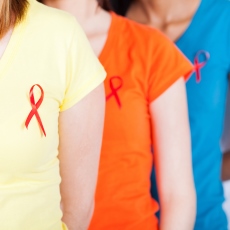 HIV often spreads through unprotected sex with an infected person. Women can get it more easily during vaginal sex than men can. HIV may also spread by sharing drug needles or through contact with the blood of an infected person.

About one in four people in the United States who have HIV are women. Women who have HIV/AIDS have some different problems from men, such as

There is no cure, but there are many medicines to fight both HIV infection and the infections and cancers that come with it. People who get early treatment can live with the disease for a long time.