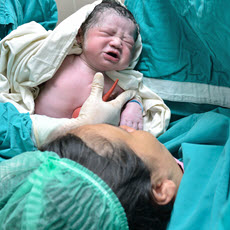 A Cesarean section (C-section) is surgery to deliver a baby. The baby is taken out through the mother's abdomen. In the United States, almost one in three women has their babies this way. Some C-sections are planned, but many are done when unexpected problems happen during delivery. Reasons for a C-section may include

The surgery is relatively safe for mother and baby. Still, it is major surgery and carries risks. It also takes longer to recover from a C-section than from vaginal birth. It can raise the risk of having difficulties with future pregnancies. Some women may have problems attempting a vaginal birth later. Still, many women are able to have a vaginal birth after cesarean (VBAC).