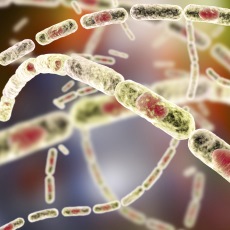 Anthrax is a disease caused by Bacillus anthracis, a germ that lives in soil. Many people know about it from the 2001 bioterror attacks. In the attacks, someone purposely spread anthrax through the U.S. mail. This killed five people and made 22 sick.

Anthrax is rare. It affects animals such as cattle, sheep, and goats more often than people. People can get anthrax from contact with infected animals, wool, meat, or hides. It can cause three forms of disease in people. They are

Antibiotics often cure anthrax if it is diagnosed early. But many people don't know they have anthrax until it is too late to treat. A vaccine to prevent anthrax is available for people in the military and others at high risk.